Vajrayana means something in Buddhism , Pali, Hinduism , Sanskrit. If you want to know the exact meaning, history, etymology or English translation of this term then check out the descriptions on this page. Add your comment or reference to a book if you want to contribute to this summary article. 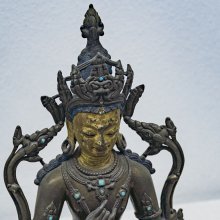 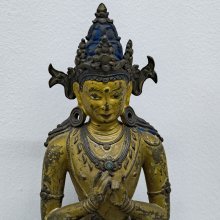 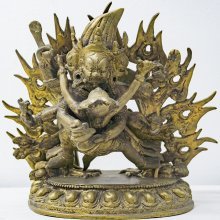 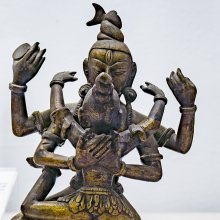 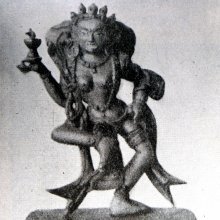 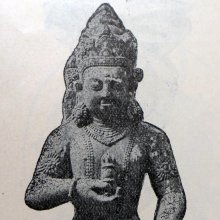 Source : WikiPedia: Vajrayana Vajrayana is a complex and multifaceted system of Buddhist thought. Vajrayana refers to one of three vehicles or routes to enlightenment, the other two being the Theravada and Mahayana. Founded by the Indian Mahasiddhas, Vajrayana subscribes to Buddhist tantric literature. Vajrayana is also known as Tantric Buddhism, Tantrayāna, Mantrayāna, Secret Mantra, Esoteric Buddhism and the Diamond Way or Thunderbolt Way.

Source : Google Books: Buddhist Tantra: A Philosophical Reflection and Religious Investigation According to Vajrayāna Prajñā and Upāya reside within the body of sentient being. Upāya resides in the high plexus ( Uṣaṇīṣa Kamala ) and the Prajñā dwells in the lowest plexus ( Mūlādhāra ), the sacrococcygeal plexuses. The central objective of the Tantra, Sādhanā is to awaken the Prajñā ( Herukā ), fro mthe lowest plexuses and making her proceed in an upward movement till she becomes united with Upāya in Uṣaṇīṣa Kamala . In Vajrayāna mand represents Upāya and womand represents Prajñā. The esoteric commingling of the two is the giver of supreme bliss ( Mahāsukha), it leads from spiritual discipliune and yogic control, it leaves to the spiritual oneness, which is the state of the Boddhicitta. Vajrayāna accepts and leads to the equipollence of Prajñā and Upāya.

Source : archive.org: The Indian Buddhist Iconography (b) Vajrayāna (वज्रयान) refers to the path ( yāna ) of Tantric Buddhism.—The Tantras were a development of the Yogācāra which was inspired by the Śūnyavāda of the Madhyamakas. Vajrayāna marks a step in advance even of the Yogācāra thought. [...] Vajrayāna is characterized as the “Path which leads to perfect enlightenment” or what they call in Sanskrit “anuttara samyak sambodhi”. Vajrayāna literally means the adamantine path or vehicle, but its technical meaning is the “Śūnya Vehicle” where Śūnya is used ina special sense to represent Vajra.

The Vajrayānists refer to Śūnya in all their writings, but this is not the Śūnya of the Madhyamakas about which neither existence nor non-existence nor a combination of the two nor a negation of the two can be predicated. [...] The Vajrayāna which is a direct outcome of the Yogācāra school introduced a new element or the element of Mahāsukha “eternal bliss” to their conception of liberation. The evolution of Buddhism became complete and found full expressionin Vajrayāna.

Source : Shambala Publications: General Vajrayāna Skt., lit., “Diamond Vehicle”; a school of Buddhism that arose, primarily in northeast and northwest India, around the mid­dle of the first millennium. It developed out of the teachings of the Mahāyāna and reached Tibet, China, and Japan from Central Asia and India along with the Mahāyāna. This movement arose from a need to extend the worldview of Buddhism to inveterate “magical” practices and is characterized by a psychological method based on highly developed ritual practices. The Vajrayāna had its origin in small groups of prac­titioners gathered around a master (guru). The accessibility of Vajrayāna through written texts as well as its assimilation by monastic institutions was a relatively late devel­opment in this movement. Because of the use of certain sacred syllables, Tibetan Buddhism also refers to the Vajrayāna as the Mantrayāna.