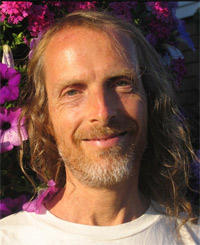 His exquisite guitar playing is intricate and sensitive, coming from a background of classical training that has been wedded with folk, rock, jazz and world music influences. His relaxed, clear tenor voice has a pure and gentle quality.

Sudhananda's music is about beauty, harmony and unity . He is inspired by nature, his master Osho, and meditation. His songs speak with conscious lyrics about love, spirituality, ecology, and social issues.

Sudhananda is also a recording engineer and producer and has worked on many recordings for the children's music label, Music For Little People, as well as other artists. Sudhananda's music is full of the light energy of living foods. He has been deeply into raw foods and natural healing for 29 years.