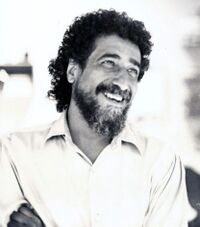 Nivedano in Japan, wearing one of Osho's hats.

Nivedano is a Brazilian percussionist born in Bahia in 1949. In his twenties he played percussion with Weather Report, Santana and others and came to Osho toward the end of Pune 1. Sarlo remembers him arriving, driving through the ashram front gate in a giant truck as if he owned the place, driving right up to Lao Tzu gate before stopping.

He was one of Osho's gardeners and played at Drive-bys at the Ranch, and came to super-prominence in the sannyas world in late Pune 2 when Osho introduced live guided meditations following his Zen discourses. Osho would call out his name and he would hit one tremendous beat on his surdo, to punctuate the stages of the meditation. More about all this in His Osho News interview (link below).

After Osho left his body, Nivedano moved back to Brazil, where he acquired some land and established an eco-commune called Campo Alegre in far-flung Alto Paraiso, next to Chapada dos Veadeiros National Park.

In January 2015 we asked Nivedano for his memories about the musical world around Osho. He kindly supplied a wealth of information:

From March 1, 1981 until the day that Osho left us I was the percussionist on all bands formations that came to play for satsangs and darshans.
Then came the Prophet days, when Bhagwan went into silence. [Note: When Osho went into silence in Pune in 1981, the satsang series at that time of silence was typically quotations from various of Kahlil Gibran's books, most prominently "The Prophet", read by someone between the five-minute periods of music that was played. The series began on 1 May 1981.]
During those "Prophet days" the band consisted of Ma Yashu (flutes), Nivedano, Rupesh and Harida (all percussion), Sw Govinddas (strings) and Yoga Krishna (brasilian, Chaitanya Hari's girlfriend - tamboura). And some guests on different days. This was right after Chaitanya Hari stopped playing for the meditations. He was told to go to Saswad and then Ma Yashu became the music coordinator until we went to New Jersey and then to the Ranch.
Most of the compositions, after Chaitanya left, were done by the group. Someone would bring a line, a melody and we would complete the song all together at rehearsals. There were singing songs that were specifically composed by someone who brought it ready made, but those were exceptions and mostly were songs played at darshans. Satsang music was usually a team effort, except for few songs that were hits and the best of them were composed by Govinddas, Yashu and Nivedano. Swami Karunesh and Swami Kamal also composed wonderful music. Yes to the River is a great collection. Milarepa at Pune 2 did compose many beautiful songs that are still now being played everywhere where celebrations are taking place worldwide.

Nivedano went along to the castle in New Jersey and the band there was Yashu (flute), Govinddas (guitars/sitar/mandolin), Nivedano (percussion), Yoga Krishna (Tamboura).

Right after that we went to the ranch, and the band at the 1st Annual World Celebration [July 3 to 7, 1982] at Magdalena cafeteria was Govinddas (guitar/sitar/mandolin...), Nivedano (drums and percussion), Toby (flute), Rupesh and Prem Git (bass).

And at the 4th Annual World Celebration [about July 1 to 6, 1985] the same band plus someone that Sheela sent to harass the band, I also forgot that one's name. And then also Anugama on keyboards. Actualy Anugama played keyboards in many celebrations. Also at that time Sheela decided that we should add Sw Prem Bhavito (violin) and the other Russian swami who played guitar. You can hear that that music was a bit different and was really wonderful.
When Osho was arrested [Oct 28, 1985] we did Basho's Pond and had Chaitanya Hari playing flutes and his parafernalia.
There was at the Ranch every year 4 celebrations, and the band was basicaly the one that I am giving you the names. Maybe I am missing someone but it was basically that formation.

We then went round the world with Osho and in Greece [around Feb 19 to Mar 6, 1986] there was Nivedano (percussion), Shavdo/Japanese (guitar and flutes), and a guitar player that I´ve forgot the name of.

In Uruguay [around Apr 12 to Jun 18, 1986] there was Nivedano and Milarepa and also we did play in Portugal once or twice.

Back in India, Poona-2, [from Jan 8, 1987] at Chuang Tzu Auditorium the band at first was only an Indian Swami who played tambourine and sang sutras. I forget his name, it really was just a tambourine, the instruments were still at Rajneeshpuram and took two weeks to arrive. Osho then decided that it was time for more energetic music and we started playing with this formation: Milarepa (guitar/singer), Nivedano (percussion), Swami Kamal (bass/keyboards), Swami Karunesh (keyboards), Swami Devakant (flutes), and Lolita (flutes). At times Swami Rupesh played tablas and percussion. This formation went on until we moved to the Buddha hall.

In the new Buddha hall [from about Dec 7, 1987] the band was bigger and most of the time was this formation: Milarepa, Nivedano, Karunesh, Kamal, Satgyan (Japanese bass player), Shavdo (bass player), Rupesh (percussion), Devakant, Lolita and Satyam, the English singer and keyboard player who later on was the music coordinator.

Then one night Nivedano and Milarepa had a heated argument about the quality of the music that was being played for the morning and evening meetings and it was then decided that we would only play from then on drums and not the singing and sweet mellow music anymore. The master loved it and then started the Oshoba. This was a name given to the music that we were playing. Not Samba but Osho-ba. This was the music played at the darshans every night for 18 months. [That must have been from about June 1988 ?]
This drove everybody insane, it was like having a celestial down load for many who enjoyed and a ego nightmare for those who were against it, some of them running the commune, made us a few enemies for life. Osho loved it and told a few that if they were not happy they didn´t need to come to the evening meeting, period.
This band was then formed as this: Nivedano (drums/percussion/snare drum), Milarepa (big surdo drum), Swami Marco (small surdo), Swami Sandesh (japanese; shakers), Swami Teerth (japanese; brasilian tambourine), Swami Abhivandan (japanese; agogo), Swami Satprem (japanese; 2nd small surdo and small percussions). The piano player was a Dutch swami Sw Siddhamo.

There was other formations later on, after Osho's departure, but the recorded music at the communes were basically made by the above listed musicians. I am sorry if I forgot somebody but those were the basic crew in residence.

Ah, and we also had Sw Shivam Sanjiva playing in many albums. He was also the sound man, actually the only sound-man who understood the musicians and the need for the music to be heard loud and clear all over the hall. With him the band really soared, and it was loud and clear and beautiful. All the others, the sound wallas, were afraid, really afraid to err and be called on their mistakes. And the sound was always compressed, dull and inexpressive or "fit for the master´s ears". Until Sanjiva started doing the sound it was so-so at best. The day we started Oshoba in Buddha Hall it was like a wall had been removed and musicians were then in charge of the music played for the master. What a sense of unbounded freedom for us all musicians. I guess because we were always having a good time playing and were considered a kind of out-cast crew, we were always saddled-up with some unfortunate brother or sister who had no idea of music, much less the tact to coordinate the moment to moment variations of the sounds and silences of our music. One can feel that, from the first day of Oshoba the whole commune started having a different pulsation everywhere. The evenings with Osho were again an Energy Darshan, every night the band took the roof off and it was possible to see stars again within the madness of such a chaos. Everyone letting go, the band giving their best to the Master´s play, it was wonderful. I am grateful to Sanjiva because he had the courage to have Jimi Hendrix sound brought to the sacred Buddha field. He is famous now and you should contact him for good information.

Thank you, love to you,
Nivedano