Template:Qual 3 Template:PaliCanon The Pāli Canon refers to the standard collection of scriptures in the Theravadan tradition, as preserved in the Pāli language.Template:Sfn

This canon is traditionally referred to as the Template:IAST (literally "three baskets"), refering to the three major sections of the canon.[lower-alpha 1] These three sections are: 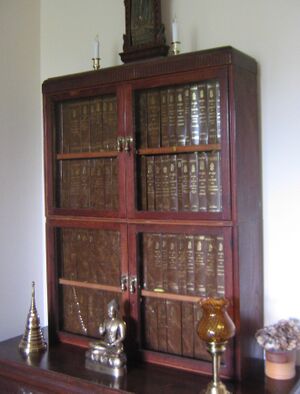 The first complete printed edition of the Canon was published in Burma in 1900, in 38 volumes.Template:Sfn The following editions of the Pali text of the Canon are readily available in the West:

The climate of Theravāda countries is not conducive to the survival of manuscripts. Apart from brief quotations in inscriptions and a two-page fragment from the eighth or ninth century found in Nepal, the oldest manuscripts known are from late in the fifteenth century,Template:Sfn and there is not very much from before the eighteenth.[8]

For English translations of texts of the Pali Canon, see:

The Pali Canon (Tipitaka) contains the following categories of texts:

Comparison with other canons

Within the Theravada tradition, the Pali Canon is traditionally referred to as the Tipitaka (literally the "three baskets").

When compared to the other Buddhist Canons: