Mahayana means something in Buddhism , Pali, Hinduism , Sanskrit. If you want to know the exact meaning, history, etymology or English translation of this term then check out the descriptions on this page. Add your comment or reference to a book if you want to contribute to this summary article. 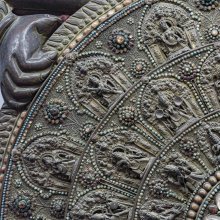 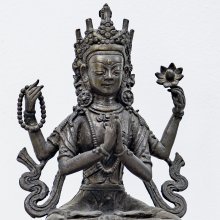 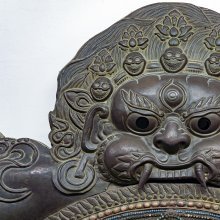 Source : Wisdom Library: Kathāsaritsāgara Mahāyāna (महायान) is the name of a Vidyādhara chief who, deserted the army of Śrutaśarman and took the side of Sūryaprabha, according to the Kathāsaritsāgara, chapter 48 . Accordingly: “... we are named Mahāyāna and Sumāya, and this Siṃhabala was the third of us; we had obtained magic power by having the rule of a great cemetery, and were unassailable by the other Vidyādharas”.

The story of Mahāyāna was narrated by the Vidyādhara king Vajraprabha to prince Naravāhanadatta in order to relate how “Sūryaprabha, being a man, obtain of old time the sovereignty over the Vidyādharas”.

The Kathāsaritsāgara (‘ocean of streams of story’), mentioning Mahāyāna, is a famous Sanskrit epic story revolving around prince Naravāhanadatta and his quest to become the emperor of the vidyādharas (celestial beings) . The work is said to have been an adaptation of Guṇāḍhya’s Bṛhatkathā consisting of 100,000 verses, which in turn is part of a larger work containing 700,000 verses.

context information Kavya (काव्य, kavya) refers to Sanskrit poetry, a popular ancient Indian tradition of literature. There have been many Sanskrit poets over the ages, hailing from ancient India and beyond. This topic includes mahakavya , or ‘epic poetry’ and natya , or ‘dramatic poetry’.

Source : Buddha World: Mahāyāna Mahāyāna (Sanskrit: महायान, mahāyāna, literally the “Great Vehicle”) is one of the two main existing branches of Buddhism and a term for classification of Buddhist philosophies and practice. Mahāyāna Buddhism originated in India.

The Mahāyāna tradition is the larger of the two major traditions of Buddhism existing today, the other being that of the Theravāda school. According to the teachings of Mahāyāna traditions, “Mahāyāna” also refers to the path of seeking complete enlightenment for the benefit of all sentient beings, also called “Bodhisattvayāna”, or the “Bodhisattva Vehicle.”

Source : Wisdom Library: Dharma-samgraha Mahāyāna (महायान) refers to the “great vehicle” and represents the third of the “three vehicles” ( triyāna ) defined in the Dharma-saṃgraha (section 2). The Dharma-samgraha (Dharmasangraha) is an extensive glossary of Buddhist technical terms in Sanskrit (eg., triyāna and mahā-yāna ). The work is attributed to Nagarguna who lived around the 2nd century A.D.

Source : archive.org: The Indian Buddhist Iconography (b) Mahāyāna (महायान) refers to one of the various Buddhist paths ( yāna ) .—Lord Buddha prescribed Yānas in the beginning, namely, the Śrāvakayāna and the Pratyekabuddhayāna. [...] Buddhism continued in this state till the rise of the Mahāyāna properly called, the Bodhisattvayāna. [...] The Mahāyānists dismissed the previous Yānas with the contemptuous epithet of Hīnayāna. They claimed that they could not only attain Nirvāṇa, nay even Buddha-hood,with their own unaided efforts, but could also help others to attain these ideals. The distinction between Mahāyāna and Hīnayāna is graphically described in the earliest work, the Mahāyānasūtrālaṃkāra, attributed to the famous Buddhist sage Asaṅga.

Source : Buddhist Door: Glossary Also called Great Vehicle or Bodhisattva Vehicle. It is a school of Buddhism prevalent in China, Korea, Japan, Mongolia, Tibet and other places in the Far East. It is also called Northern Buddhism. Mahayana is described as seeking Buddhahood and transforming beings, thus self benefiting for the benefits of the others. See also Hinayana. For further details, please refer to Section 3 A Glimpse in the Scope of Buddhism in Vol. 1 No. 4 of Budddhist Door. Source : WikiPedia: Buddhism Mahayana is one of the two main existing schools of Buddhism and a term for classification of Buddhist philosophies and practice. It was founded in India.

The name Mahayana is used in three main senses:

Source : Shambala Publications: General Mahāyāna Skt., lit., “Great Vehicle”; one of the two great schools of Buddhism, the other being the Hīnayāna, “Small Vehicle.” The Mahāyāna, which arose in the first century CE, is called Great Vehicle because, thanks to its many-sided approach, it opens the way of lib­eration to a great number of people and expresses the intention to liberate all beings.

Hīnayāna and Mahāyāna are both rooted in the basic teachings of the historical Buddha Shākyamuni, but stress different aspects of those teachings. While Hīnayāna seeks the liber­ation of the individual, the follower of the Mahāyāna seeks to attain enlightenment for the sake of the welfare of all beings. This attitude is embodied in the Mahāyāna ideal of the bo­dhisattva, whose outstanding quality is compas­sion (karunā).

The Mahāyāna developed from the Hīnayāna schools of the Mahāsānghikas and Sarvāstivādins (Sarvāstivāda), which formu­lated important aspects of its teaching. From the Mahāsānghikas came the teaching, characteris­tic of the Mahāyāna, of the transcendent nature of a buddha, as well as the bodhisattva ideal and the notion of emptiness (shūnyatā ). Seeds of the trikāya teaching can be recognized in the doctrine of the Sarvāstivādins.

The Mahāyāna divided into a series of further schools, which spread from India to Tibet, Chi­na, Korea, and Japan. In India arose the Mādhyamika school, founded by Nāgārju­na, and the Yogāchāra school, founded by Asanga. Parallel to the development of Tan­tra in Hinduism, in Buddhism also a magic-oriented school appeared, the Vajrayāna, which today flourishes primarily in Tibetan Buddhism.

The most important Mahāyāna schools in China were Ch’an, Hua-yen, T’ien-t’ai, and the Pure Land school. These schools were fur­ther developed in Japan as Zen, Kegon, Tendai, and Amidism, respectively.

The teachings of the Mahāyāna are contained in the Mahāyāna sūtras and shāstras, among which are some of the most pro­found writings of Buddhism.

Mahāyāna is a Sanskrit compound consisting of the terms mahā and yāna (यान).