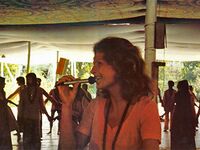 After facilitating Sufi Dance, Healing Circles and Singing Circles since the sixties (for five years daily in Poona 1, often together with Anubhava) Aneeta now creates by just her presence and the space she inhabits, a circle of presence that she calls Heart Dance, a sacred and playful space of singing together songs and sacred phrases from many traditions of universal peace and celebration. Aneeta and Anubhava have led Heartdance and singing celebrations together for over 25 years in many places, countries and continents.

"Within days of my November ’76 arrival in Pune, Aneeta arrived, also from California. She was the woman who had learned Sufi Dance with Pir Vilayat Khan and brought this uplifting practice to the world of Osho. And almost immediately, Osho invited Aneeta to start leading Sufi Dance every day at 10 in the morning." (Ma Aneesha)