Waduda is an Italian based in the US, not to be confused with the other Ma Deva Waduda, an American based in Italy. 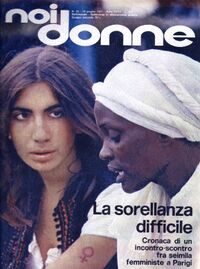 Waduda studied Psychology at the University of Rome. She was part of the feminist movement, belonging to a group of women who created the hugely popular Radio Donna, Italy's first and only feminist radio station. She also contributed to Radio Citta Futura, an avant garde radio station in Rome. She worked as a journalist for many years in Rome, contributing to many different magazines, and had her own column titled “Heaven and Earth” in the magazine New Age, New Sounds.

Osho initiated Waduda into sannyas at the Pune commune on the May full moon of 1978. She stayed in India together with her partner Bhikkhu until May of 1981, when they founded Nityam Meditation Center on the Italian island of Pantelleria.

After Sheela consolidated the various independent Osho Centers, Waduda and Bhikkhu started two budget hotels in Amsterdam. One, called the Wu Wei Boat, was previously an Osho meditation center. The other was Hotel Utopia. During this period, they visited Rajneeshpuram annually and stayed for the final four months before the Ranch closed. 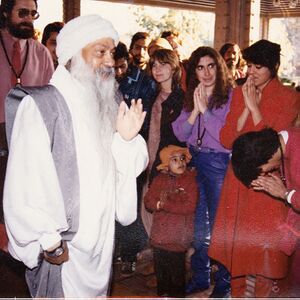 They reconnected with Osho in Kathmandu, where they ended up staying in the room next to him in the Oberoi Soltee Hotel until he left. During their stay, Waduda shared with Osho her idea for a book on women’s issues, called Beyond Man, Beyond Woman, and she asked Osho if he was willing to be interviewed for that book. Osho agreed, chose a photo for the cover, and suggested adding the word “Liberation” to the title, so it would read Liberation: Beyond Man, Beyond Woman. Later on, this led to a series of private interviews with Osho in his room in Pune, after evening discourse, over a period of four days in March of 1987. Before Waduda could finish the book project, this series of interviews was published as part of the Osho compilation book entitled A New Vision of Women's Liberation. About this, also see it's Talk page.

From Kathmandu, Waduda and Bhikkhu then followed Osho to Greece, where they filmed his arrest and press interview in the Athens airport.

Back in Amsterdam, they sold their hotel and relocated to Pune in February 1987. After completing Osho Advanced Hypnosis training under Ma Anand Ragini at the Osho Multiversity in 1988, Waduda began to lead hypnosis, NLP and energy work groups at the Osho Multiversity and abroad. After many years working as a facilitator, she combined the many different disciplines she had learned into her own new method called Zen: The Magic of Now. Exploring the six senses, participants would be able to know new dimensions where the final destination is meditation. The method is an invitation to take an inner journey in search of one’s self.

“There are no lessons in Zen. Zen is not a teaching but a device to awaken you. It is not information, it is not knowledge. It is a method to shake you up, to wake you up.” –Osho (Ah, This!) 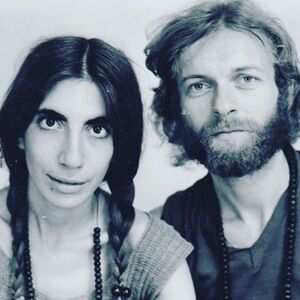 Waduda and Bhikkhu, during Poona 1 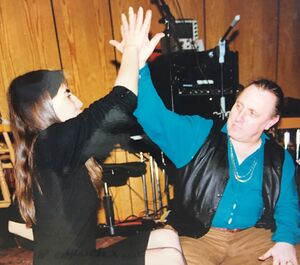 After studying hypnosis and NLP at the Osho Multiversity, she later became a certified Hypnotist and NLP & Hypnosis Master Practitioner. She is a certified Hypnotherapist, recognized by the National Guild of Hypnotherapists USA, and a member of the International Association of Neuro-Linguistic Programming. In the US, she earned her Master Communicator certification studying under Richard Bandler. She completed her meta-communication training with Robert Dilts and Robert McDonald in Germany, and is the director of the Osho Institute of NLP, Meditation and Metacommunication. 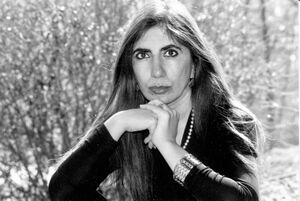 In 1990, Waduda co-founded New Earth Records with her partner Bhikkhu, taking part in the creation of over 270 meditative music albums. She has co-published the book Osho: The First Buddha in the Dental Chair by Sw Devageet at Sammasati Publishing. 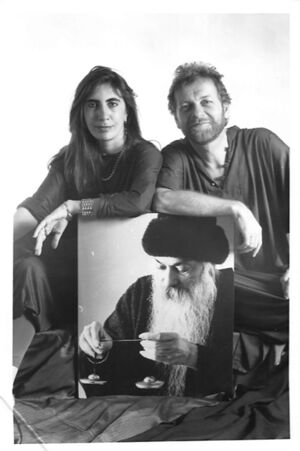 Waduda and Bhikkhu, during Poona 2