Template:Tibetan Longchenpa (Tib. ཀློང་ཆེན་པ་, Wyl. rigpawiki klong chen pa), also known as Longchen Rabjam (Tib. ཀློང་ཆེན་རབ་འབྱམས་, klong chen rab 'byams), ‘Infinite, Vast Expanse of Space’, or Drimé Özer (1308-1364), was one of the most brilliant teachers of the Nyingma rigpawiki lineage. He systematized the Nyingma teachings in his ‘Seven Treasures’ and wrote extensively on Dzogchen rigpawiki. He transmitted the Longchen Nyingtik rigpawiki cycle of teachings and practice to Jikmé Lingpa rigpawiki, and it has since become one of the most widely practised of traditions.

The immediate reincarnation of Pema Ledreltsal, Longchenpa is regarded as an indirect incarnation of the princess Pema Sal. He was born in the Tra Valley of Southern Tibet to master Tenpasung, an adept at both the sciences and the practice of mantra, and Dromza Sonamgyen, who was descended from the family of Dromtönpa Gyalwé Jungné. Longchenpa was first ordained at the age of eleven and studied extensively with the Third Karmapa rigpawiki, Rangjung Dorje. He received not only the Nyingma rigpawiki transmissions as passed down in his family, but also studied with many of the great teachers of his day. He received the combined Kadam rigpawiki and Sakya rigpawiki teachings of the Sutrayana rigpawiki through his main Sakya rigpawiki teacher, Lama Dampa Sonam Gyaltsen, in addition to the corpus of both old and new translation tantras. At the age of nineteen, Longchenpa entered the famous shedra Sangphu Neuthok, where he acquired great scholarly wisdom. He later chose to practise in the solitude of the mountains, after becoming disillusioned by the behaviour of some scholars. During his late twenties two events occurred that were to be of decisive importance in his intellectual and spiritual development. One was a vision of Guru Padmasambhava rigpawiki and Yeshe Tsogyal rigpawiki, and the other was his meeting with the great Rigdzin Kumaradza. It was in the mountains that he met Rigdzin Kumaradza, who was travelling from valley to valley leading his students through the most difficult of circumstances. Together with Rangjung Dorje, Longchenpa accompanied them for two years, during which time he received all of Rigdzin Kumaradza's transmissions and underwent tremendous hardship.

After several years in retreat, Lonchenpa attracted more and more students, even though he had spent nearly all of his life in mountain caves. During a stay in Bhutan (Tib. Mon), Longchenpa founded several monasteries, including Tharpaling near Bumthang, and fathered two children, his son Tulku Drakpa Özer (b. 1356), going on to become a holder of the Nyingtik lineage.

The events leading up to Longchenpa's parinirvana are recorded in a text known as The Immaculate Radiance which includes these lines:

My delight in death is far, far greater than
The delight of traders at making vast fortunes at sea,
Or the lords of the gods who vaunt their victory in battle;
Or of those sages who have entered the rapture of perfect absorption.
So just as a traveller who sets out on the road when it is time,
I, Pema Ledrel Tsal, will not remain in this world any longer,
But will go to dwell in the stronghold of the great bliss of deathlessness.

The figure of Longchen Rabjam stands out as one of the greatest Dzogchen masters in the Nyingma tradition, and amongst the most brilliant and original writers in Tibetan Buddhist literature. He was the author of over 200 works, of which only about twenty-five survive, and amongst which the Seven Treasuries rigpawiki (Tib. མཛོད་བདུན་ Dzö Dun) and Three Trilogies are most well-known. It was he who brought together into a cohesive system the teachings of Vima Nyingtik and Khandro Nyingtik, on which he wrote the ‘Three Yangtik’ or Inner Essences.

As Nyoshul Khen Rinpoche rigpawiki explains: “Kunkhyen Longchenpa’s Seven Treasuries (Dzö Dun) were written to elucidate the extraordinarily profound meaning of the seventeen main Tantras of Dzogpachenpo as well as the teachings of all Nine Yanas. For the purpose of the actual practice of Dzogchen according to these Tantras, Longchenpa gathered his own termas as well as those of Chetsün Senge Wangchuk (who was later reborn as Jamyang Khyentse Wangpo rigpawiki) and Pema Lédrel Tsal (Longchenpa’s previous incarnation) in the form of the thirteen volume collection known as the Nyingtik Yabshyi. This Yabshyi is the practice aspect of Longchenpa’s writings, and the basis of the Old Nyingtik. In it he synthesized the Vima Nyingtik of Vimalamitra rigpawiki and the Khandro Nyingtik of Guru Rinpoche rigpawiki and explained all the practical details in the light of his own realization.”[1] 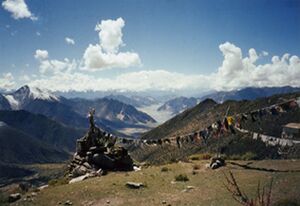 Gangri Thökar where Longchenpa composed many of his writings

Longchenpa used several different names in the colophons to his writings, often corresponding to the subject matter of the text:[2]

Teachings Given to the Rigpa sangha