Lisa Simpson is a fictional Buddhist dhammawiki and vegetarian on The Simpsons. Along with Lenny Leonard and Carl Carlson, Lisa Simpson is portrayed as a Buddhist on the show.

Lisa is an extremely intelligent 8-year-old girl, one of the most intelligent characters on the show, with an I.Q. of either 156 or 159. She also plays the baritone saxophone. Another notable quality about her is that she is a vegetarian; she became one in the episode "Lisa the Vegetarian" in the seventh season. 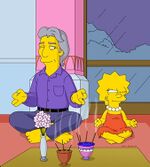 Lisa's knowledge covers a wide range of subjects, from astronomy to medicine, and she is notably more concerned with world affairs than her life in Springfield. Lisa occasionally worries her family's dull habits will rub off on her, though "Lisa the Simpson" suggests intellect and over-achievement is actually common among female members of the Simpson family. Lisa also deeply values her integrity, as demonstrated when she cheats on a test on The Wind in the Willows to attain her highest grade of A+++, but later admits her dishonesty to an unreceptive Principal Skinner, and later self-grades her test as an F. In "The President Wore Pearls", Lisa's dedication to being Student Council President makes her troublesome with the teaching staff, so Principal Skinner temporarily transfers her to a school for the academically gifted, much to her delight (although Homer refuses to allow her to attend). She was also able to talk at a very young age, as seen in "Lisa's First Word".

Although her rebellion against social normalcies is usually depicted as constructive and heroic, Lisa can be self-righteous at times. Notably, in "Lisa the Vegetarian", her increasing sense of moral righteousness regarding her vegetarianism leads her to proselytize, culminating in her disruption of a "meat-based" barbecue prepared by Homer, an act she comes to rue. In "Bart Star", she triumphantly declares that she, a girl, would like to join the football team. When it is revealed that there are already girls on the team, she declares her distaste for a sport that would use a pig's skin to make its ball. When it is revealed that the ball is actually synthetic, she is at a loss for words and runs off crying. She is often embarrassed and disapproving of her eccentric family: of her father's poor parenting skills and buffoonish personality; her mother's stereotyped image and inability to recognize social abnormalities; and her brother's delinquent and low-brow nature. She is also concerned that Maggie may grow up to be like the rest of the family, and is seen trying to teach her complex ideas. However, in the end she is very loyal to her family, most clearly seen in "Lisa's Wedding", which deals with her concerns with introducing them to her cultured future fiancé.

Despite her high intelligence, Lisa does have typical childhood issues, sometimes requiring adult intervention. In "Lost Our Lisa", she tricks Homer into allowing her to ride the bus alone, only to become hopelessly lost. After his coworkers Lenny Leonard and Carl Carlson point out that he allowed his 8-year-old daughter to ride a bus by herself, Homer comes to her rescue. In one episode, Lisa has a Jewish imaginary friend named Rachel who "just got into Brandeis." In the earlier seasons, Lisa displayed more personality traits of a young girl, including obsessing over getting a pony, addiction to TV and fighting with Bart many times throughout the series. She also finds Bart's joke-calls to Moe's Tavern funny (although she never does it personally). It is slightly less prevalent in the later seasons. She, along with her brother, enjoys "The Itchy and Scratchy Show" despite its extreme violence and general lowbrow nature.

In "Homer's Enemy", it is mentioned that Lisa has an IQ of 156. She is a member of Mensa Springfield. Lisa demonstrates an early intelligence by changing her own diaper as an infant and completing a puzzle in Dr. Pryor's office at 3 years old. When unable to attend school due to a teachers' strike action in "The PTA Disbands", she suffered a sort of "school withdrawal" and invents a perpetual motion machine that Homer describes as going "faster and faster". He goes on to chastise her, saying "In this house, we obey the laws of thermodynamics!"

Lisa's political convictions are generally socially liberal. She is a vegetarian, and a supporter of the Free Tibet movement.[1] [2] While still supportive of the Christian church in which she was raised,[3] Lisa became a practicing Buddhism|Buddhist following her decision to follow The Noble Eightfold Middle Path.[4] She also supports the theory of Darwinism and evolution, calling Darwin "one of the greatest minds" of all time, as seen in the episode, "The Monkey Suit." Though apparently not an adherent, she mentions in one episode that she considers Wicca "very empowering." [5] She has also expressed tolerance and acceptance of homosexuality in a number of different episodes, including "Three Gays of the Condo". There have been several instances where Lisa has used extreme measures to get her point across (such as throwing paint on the Keebler elves [6] and on Krusty the Clown for wearing a fur coat).

Lisa's quintessentially good nature, even compared to her family members, is symbolized in the episode "Simpsons Bible Stories", when she is the only family member to be raised up to Heaven during the Rapture (although Homer pulls her back down so she can go to Hell with the rest of them).

Lisa has had relationships with several boys, including Ralph Wiggum ("I Love Lisa"), Nelson Muntz ("Lisa's Date with Density" and "Love, Springfieldian Style") and Colin (The Simpsons Movie). She has revealed that the boy in school that she likes the most is a never-seen boy called Langdon Alger. Milhouse Van Houten also has a crush on her, and tries to get her to kiss or date him frequently, and as yet has been unsuccessful. Although, it is hinted that he might become her future boyfriend/husband. In Lisa's Wedding she is shown by a gypsy at a carnival that she will become engaged to a man named Hugh Parkfield. However, she leaves him on their wedding day as he doesn't care for her family and doesn't want them to be a part of their lives.

Lisa is a great music fan, best evidenced by her proficiency with the saxophone and her relationship with musician Bleeding Gums Murphy, whom she regards as both a friend and an idol. Murphy was the only one able to pull Lisa out of her depression in "Moaning Lisa", and she was deeply saddened by his death in "'Round Springfield". Lisa is a great fan of jazz and the blues. She claims that she, unlike white Hip hop rap fans, is not hypocritical being a white girl who is such a fan of African American black music because "the blues is unpopular". She has referenced enjoying the music of John Coltrane and her favorite album is Birth of the Cool by Miles Davis.

The voice actress for Lisa is Yeardley Smith. Matt Groening first conceived the Simpson family in the lobby of James L. Brooks' office. He had been called in to pitch a series of animated shorts, and had intended to present his Life in Hell series. When he realized that animating Life in Hell would require him to rescind publication rights for his life's work, Groening decided to go in another direction. He hurriedly sketched out his version of a dysfunctional family, and named the characters after various members of his own family, and Lisa is the name of one of his sisters. Lisa then made her debut with the rest of the Simpsons clan on April 19, 1987 in the The Tracey Ullman short "Good Night" (The Simpsons short). Nancy Cartwright, originally auditioned for the role of Lisa. However, upon arriving at the audition, she instead asked for the role of Bart believing that the role was better for her.[7] Yeardley Smith had initially been asked to audition for the role of Bart but casting director Bonita Pietila believed her voice was too high, so Smith was given the role of Lisa instead. In order to perform the voice, Smith lifts her voice up a little.

In the Tracey Ullman Show shorts, Lisa was more of a "female Bart" and was equally mischievous. As the series progressed, Lisa began to develop into a more intelligent and more emotional character with "Krusty Gets Busted" being one of the first episodes where her true intelligence is fully shown. Many episodes focusing on Lisa have an emotional nature, the first one being "Moaning Lisa". The idea for the episode was pitched by James L. Brooks, who had wanted to do an emotional episode where Lisa is sad because the show had done a lot of "jokey episodes".

In 2001 Lisa received a special "Board of Directors Ongoing Commitment Award" at the Environmental Media Awards. "Lisa the Vegetarian", an episode from The Simpsons the seventh season, won both an Environmental Media Award for "Best Television Episodic Comedy" and a Genesis Award for "Best Television Comedy Series, Ongoing Commitment". Lisa was also listed at number 11 (in the same entry as Bart) in TV Guide's "Top 50 Greatest Cartoon Characters of All Time."[8] In Japan, the broadcasters of the series found they were able to turn the apparent viewer dislike of the series around by focusing marketing attention on Lisa. Lisa's well-intended but ill-fated struggles to be a voice of reason and a force of good in her family and city struck a chord with the Japanese.[9]