Lama means something in Buddhism , Pali, Hinduism , Sanskrit. If you want to know the exact meaning, history, etymology or English translation of this term then check out the descriptions on this page. Add your comment or reference to a book if you want to contribute to this summary article. Source : archive.org: Indian Historical Quarterly Vol. 7 (shaivism) Lāmā (लामा) refers to a group of female Tantrik adepts, according to the 8th-centry Jayadratha-yāmala.—Lāmā is not the commonly known Tibetan word “ bla-ma ” meaning “scholar”, but something different. The Lāmās otherwise called Rūpikā and Cumbikā flourish among the rare group of the Kāśyapīs. Association with them is conducive to spiritual success. They are called Rūpikā because they assume different shapes during their intercourse with others. They are called Cumbikā because they kiss at the very first introduction.

In the Hevajra-tantra (Paṭala 3 fol. 6a) the Lāmās are referred to in the company of the Ḍākinīs and called Khaṇḍarohā and Rūpiṇī. The Lāmās therefore constituted a mystic group of female Tantrik adepts who had their special practices. The Sammoha-tantra (fol. 39b) in another place distinctly refers to a Tantrik practice ( vidyā ) called Lamayāmnāya i.e. the āmnāya of the Lamas or Lāmās.

The Jayadratha-yāmala while describing the special practices of the Lāmās mentions the special language to be used with them. This language is described as monosyllabic (Ekākṣara-samullāpa) and may thus be considered to have belonged to the Sino-Tibetan family as the Lamas themselves belonged to the Tibetan group of mystics.

We have already seen that the Lāmās were Rūpikā as they were capable of assuming different shapes. Some of the 24 names enumerated are descriptive of such shapes which they could assume. 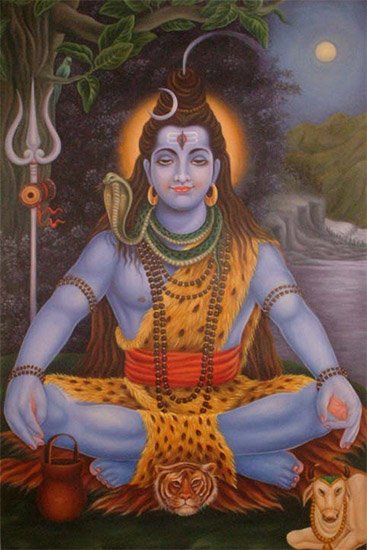 context information Shaiva (शैव, śaiva) or Shaivism (śaivism) represents a tradition of Hinduism worshiping Shiva as the supreme being. Closely related to Shaktism, Shaiva literature includes a range of scriptures, including Tantras, while the root of this tradition may be traced back to the ancient Vedas.

Source : archive.org: The Indian Buddhist Iconography Lāmā (लामा) refers to one of the four Ḍākinī Goddesses, as mentioned in the 5th-century Sādhanamālā (a collection of sādhana texts that contain detailed instructions for rituals).—In this group of Goddesses are included the names of [viz., Lāmā] who are widely mentioned in the Tantric works of rituals. In the sambara-maṇḍala of the Niṣpannayogāvalī their names are mentioned as companion deities of Sambara. Again, in the ṣaṭcakravarti-maṇḍala they are mentioned as companion deities. But their forms are found described only in the Sādhanamālā. According to this authority they [viz., Lāmā] are all alike in appearance holding identical symbols.

Lāmā is to be visualised by the practitioner as a fierce and therianthropic (half-beast, half-human) goddess having three eyes, loose hair and dancing naked in the ardhaparyaṅka pose, with Bhairava and Kālarāri beneath their feet. They are depicted as having four arms, holding a skull and staff in two arms while holding the head of Brahmā and a chopper in the other two arms.

Source : academia.edu: The Structure and Meanings of the Heruka Maṇḍala Lāmā (लामा) refers to one of the twenty-four Ḍākinīs positioned at the padma (lotus) in the middle of the Herukamaṇḍala , according to the 10th century Ḍākārṇava chapter 15. Accordingly, between the north and west (of the heruka-maṇḍala ) are six Ḍākinīs who are half green and half red in color. They [viz., Lāmā] are headed by the major four Ḍākinīs of the Cakrasaṃvara tradition. They stand in the Pratyālīḍha posture and, except for the body posture, their physical features and objects that they hold are the same as Vajravārāhīs.

Lāmā (लामा) is also mentioned as the Ḍākinī who, together with the Vīra (hero) named Viśvaḍāka forms one of the 36 pairs situated in the Vajracakra . Accordingly, the vajracakra refers to one of the four divisions of the sahaja-puṭa (‘innate layer’) , situated within the padma (lotus) in the middle of the Herukamaṇḍala . The 36 pairs of Ḍākinīs [viz., Lāmā] and Vīras each have one face and four arms; they hold a skull bowl, a skull staff, a small drum and a knife; they are dark-bluish-black in color.

Source : Shambala Publications: General Lama (bla-ma), Tib., lit., “none above”; in Tibetan Buddhism a religious master, or guru, venerated by his or her students, since he or she is an authen­tic embodiment of the Buddhist teachings. The term lama is used for the Sanskrit guru in the traditional Indian sense, but includes still fur­ther meanings. For the Vajrayāna, the lama is particularly important, since his or her role is not only to teach rituals but also to conduct them. As spiritual authority, the lama can be the head of one or several monasteries and possess political in­fluence. The spiritual “value” of the lama is indicated by the honorific title rinpoche (“greatly precious”), which is bestowed upon es­pecially qualified masters. Today, however, lama is often used as a polite form of address for any Tibetan monk, regardless of the level of his spiritual development.

The traditional training of a lama includes many years of study of the various disciplines of Buddhist philosophy and meditation. Only after completion of a so-called retreat of more than three years was the lama finally authorized to refer to him- or herself as such and to transmit knowledge to others.