Khenchen Namdrol Tsering (Tib. མཁན་ཆེན་རྣམ་གྲོལ་ཚེ་རིང་, Wyl. rigpawiki mkhan chen rnam grol tshe ring) (b. 1953) is one of the leading khenpos in the Nyingma rigpawiki tradition and is universally acknowledged as an expert on the Guhyagarbha Tantra and its various commentaries. As a khenchen, he is one of three most senior khenpos of Namdroling Monastery rigpawiki and is also one of the foremost disciples of Khenpo Jikme Phuntsok. He oversees Rigpa Shedra East in Pharping, Nepal.

Khenchen Namdrol was born in 1953 in Samar in Derge. At the age of seven,[1] in 1959, he fled Tibet together with Penor Rinpoche and reached Bylakuppe, South India. He became a monk at the age of thirteen, and learned reading and writing directly from Penor Rinpoche.

In 1968 he completed the five hundred thousand accumulations of the preliminary practice. He began his studies with Nyoshul Khen Rinpoche rigpawiki, receiving teachings on the Viśeṣa-stava and the Thirty-Seven Practices of the Bodhisattvas and also studied the Bodhicharyavatara rigpawiki with the Sakya Khenpo Khedrub, who stayed at Namdroling for three years. He decided to study the Bodhicharyavatara with Khunu Lama Tenzin Gyaltsen in Pokhara, Nepal, but arrived as the teachings were concluding. From Nepal he went on to Darjeeling where he received teachings on Nagarjuna's Collection of Middle Way Reasoning rigpawiki from Khenpo Palden Sherab rigpawiki and then to Dabrali in Sikkim, where he studied Prajnaparamita rigpawiki, Madhyamika rigpawiki, Pramana rigpawiki and other topics with Khenpo Tsöndrü at the Sikkimese government shedra. 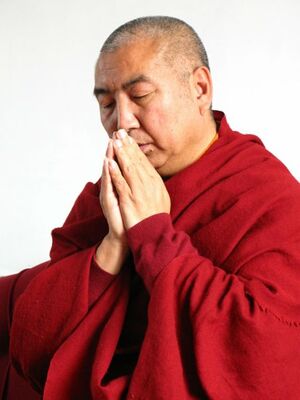 In 1978 he returned to Namdroling Monastery rigpawiki with Khenpo Tsöndrü and together they established the Ngagyur Nyingma Institute. Since its beginnings, Khenpo has played a key role in administering and teaching at the institute. He received the formal title of khenpo from Penor Rinpoche in 1983.

In 1988 he traveled to Serta, in Kham Province Tibet, to receive teachings from Khenpo Jikme Phuntsok, including the Guhyagarbha Tantra, Chetsün Nyingtik, and Khenpo's own written instructions on Dzogchen rigpawiki. Again in 1992, he returned to Tibet and received further Dzogchen instructions from Khenpo Jikme Phuntsok. He accompanied Khenpo Jikhpun on his tour of Europe and America in 1993, including his visit to Lerab Ling.

In 1998, under the guidance of Penor Rinpoche, he established the Palyul Retreat Centre, Samten Osel Ling in Pharping, Kathmandu Valley, Nepal. Khenpo now spends much of his time at his centre, as well as teaching abroad and at the Ngagyur Nyingma Institute. From 2003 to 2006 he taught Dodrupchen Jikmé Tenpé Nyima's Key to the Precious Treasury at Lerab Ling. This was part of a series of teachings on the major commentaries to the Guhyagarbha Tantra offered in Europe and America and translated by Sangye Khandro.

On 26 December 2004, Khenpo organized the first anniversary ceremony for Khenpo Jikme Phuntsok in Bodh Gaya rigpawiki, which was led by Penor Rinpoche and attended by a large assembly of monks, nuns and lay practitioners. In 2009 he gave a talk entitled "The Madhyamaka and Dzogchen views of the fundamental nature of phenomena" at the International Conference on Buddhism and Science held at the Central University of Tibetan Studies in Sarnath rigpawiki. In June 2012 he concluded a series of teachings on Longchenpa's Treasury of Word and Meaning in California, describing the teachings as the most significant achievement of his life.

Teachings & Transmissions Given to the Rigpa Sangha