Bodhi means something in Buddhism , Pali, Hinduism , Sanskrit, the history of ancient India. If you want to know the exact meaning, history, etymology or English translation of this term then check out the descriptions on this page. Add your comment or reference to a book if you want to contribute to this summary article. 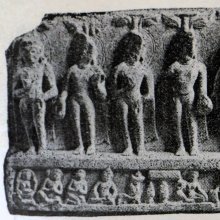 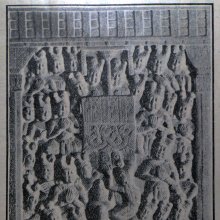 [ «previous (B) next» ] — Bodhi in Tibetan Buddhism glossary

Source : Wisdom Library: Tibetan Buddhism Bodhi (बोधि) is the name of a Rāśi (zodiac sign) mentioned as attending the teachings in the 6th century Mañjuśrīmūlakalpa: one of the largest Kriyā Tantras devoted to Mañjuśrī (the Bodhisattva of wisdom) representing an encyclopedia of knowledge primarily concerned with ritualistic elements in Buddhism. The teachings in this text originate from Mañjuśrī and were taught to and by Buddha Śākyamuni in the presence of a large audience (including Bodhi).

Source : Wisdomlib Libary: Vajrayogini Bodhi (बोधि) is the name of the tree ( vṛkṣa ) associated with Gahvara : the northern cremation ground ( śmaśāna ) according to the Vajravārāhī-sādhana by Umāpatideva as found in te 12th century Guhyasamayasādhanamālā. The tree associated with the north is sometimes given as Aśvattha. As a part of this sādhana , the practicioner is to visualize a suitable dwelling place for the goddess inside the circle of protection which takes the form of eight cremation grounds.

These trees (e.g., Bodhi) that are associated with the cremation grounds are often equated with the eight bodhi -trees of the Buddhas (the current buddha plus the seven previous one). According to the Śmaśānavidhi each tree has a secondary tree ( upavṛkṣa ) that is depicted as lovely and covered in vaṅga flowers and fruit. In each tree lives a naked rākṣasa who is wrathful in form, who eats human flesh and who has the animal face or the mount of the dikpati in his cremation ground.

Source : Pali Kanon: Manual of Buddhist Terms and Doctrines (from verbal root budhi, to awaken, to understand): awakenment, enlightenment, supreme knowledge. "(Through Bodhi) one awakens from the slumber or stupor (inflicted upon the mind) by the defilements (kilesa) and comprehends the Four Noble Truths (sacca)" (Com. to M. 10).

As components of the state of enlightenment and contributory factors to its achievement, are mentioned in the texts: the 7 factors of enlightenment (bojjhanga = bodhi-anga) and the 37 'things pertaining to enlightenment' (bodhipakkhiya-dhammā). In one of the later books of the Sutta-Pitaka, the Buddhavamsa, 10 bodhipācana-dhammā are mentioned, i.e. qualities that lead to the ripening of perfect enlightenment; these are the 10 perfections (pāramī).

There is a threefold classification of enlightenment:

This 3-fold division, however, is of later origin, and in this form it neither occurs in the canonical texts nor in the older Sutta commentaries. The closest approximation to it is found in a verse sutta which is probably of a comparatively later period, the Treasure Store Sutta (Nidhikkanda Sutta) of the Khuddakapātha, where the following 3 terms are mentioned in stanza 15: sāvaka-pāramī, pacceka-bodhi, buddha-bhūmi (see Khp. Tr., pp. 247f.).

The commentaries (e.g. to M., Buddhavamsa, Cariyapitaka) generally give a 4-fold explanation of the word bodhi:

Neither in the canonical texts nor in the old commentaries is it stated that a follower of the Buddha may choose between the three kinds of enlightenment and aspire either to become a Buddha, a Pacceka-Buddha, or an Arahat-disciple. This conception of a choice between three aspirations is, however, frequently found in present-day Theravāda countries, e.g. in Sri Lanka.

Source : Wisdom Library: Maha Prajnaparamita Sastra Bodhi (बोधि) according to the 2nd century Mahāprajñāpāramitāśāstra (chapter VII) .—“Bodhi is the path of the Buddhas ( buddhamārga ); Sattva is either a being or a great mind. The Bodhisattva is the being who is going to obtain the mind, indestructible ( aheya ) and infrangible ( acyuta ) like a diamond mountain ( vajra-parvata ), of the qualities ( guṇa ) of the path of the Buddhas. Such is the great mind”.

Source : Buddhist Door: Glossary A term used in both Sanskrit and Pali, meaning perfect wisdom or enlightenment. Source : WikiPedia: Buddhism Bodhi is both the Pali and Sanskrit word traditionally translated into English as "enlightenment." The word "buddha" means "one who has achieved bodhi." Bodhi is also frequently (and more accurately) translated as "awakening."

Bodhi is attained when the ten fetters that bind a human being to the wheel of samsara have been dissolved; when the Four Noble Truths have been fully understood and all volitional conditioning has reached cessation (nirodha), giving rise to transcendent peace (nibbana). At this moment, the psychological roots of all greed (lobha), aversion (dosa), delusion (moha), ignorance (avijja), craving (tanha) and ego centered consciousness (atta) are completely uprooted.

Bodhi is the ultimate goal of Buddhist life (brahmacarya). It is achieved by observing the eightfold path, the development of the paramitas (virtues) and profound wisdom into the dependently arisen nature of phenomena.

Source : Buddhism Tourism: Glossary of Buddhist Terms A Sanskrit term used for enlightenment. The term is generally applied to those individuals who have understood the effectiveness of four noble truths and achieved the results of completing the eightfold path.

[ «previous (B) next» ] — Bodhi in India history glossary

2) The enlightened intellect of a Buddha.

5) An epithet of Buddha.

( -dhiḥ ) 1. A branch of holy study; keeping the mind awake to the knowledge of the true God. 2. Intellect, understanding. 3. The holy fig-tree. E. budh to know, Unadi aff. in .