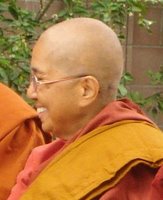 Ayya Gunasari was born in Myanmar in 1932 and after becoming a physician, immigrated to the United States to work in medicine with her husband in 1961. After raising five children, she started her meditation in the late seventies under the tutorship of the late Taungpulu Sayadaw, the late Sayadaw U Silananda and Sayadaw U Pandita.

Over nearly 30 years, through many retreats with these teachers, she has developed the practice of the Four Foundations of Mindfulness and Vipassana Meditation as taught by them.

In 2002, then a grandmother, she entered into monastic life as a samaneri (female novice) at the age of 70 at Dharmavijaya in Los Angeles, ordained by Venerable Bhante Pannyaloka Mahathera and Ven. Bhante Dr. Walpola Piyananda, Chief Sangha Nayaka Thero of the Sri Lankan Sahgha in North America.

In the year 2003, Venerable Gunasari and Venerable Saccavadi became the first two Burmese women in modern times to receive full ordination as Bhikkhunis in Sri Lanka in accordance with the Theravadan tradition via dual ordination by Venerable Dhammaloka Nayaka Thero of the Amarapura Sect in Sri Lanka.

Following full ordination, she returned to the United States where she was actively involved in organizing Vipassana Meditation retreats and Youth Dhamma classes at Thanti Thisar Vipassana meditation Center in Riverside, Southern California.

In 2006, she was awarded as an Outstanding Woman in Buddhism on International Women's Day at the United Nations in Bangkok. In 2007, called for by HH the Dalai Lama, she participated as a speaker at the First Global Congress of Buddhist Women in Hamburg, Germany.

In 2008 she was invited to become abbess of Mahapajapati Monastery where she currently resides.