Rigpa is an international network of centres and groups offering the Buddha rigpawiki’s teachings in a way that is based on an authentic tradition, yet also relevant and beneficial for people in the modern world. Rigpa offers courses and seminars in meditation and compassion, as well as a complete path of study and practice for every stage of the Buddha’s teachings.

Rigpa was founded in 1979 by Sogyal Rinpoche, a Buddhist teacher from Tibet, who is also the author of The Tibetan Book of Living and Dying. Rigpa has the gracious patronage of His Holiness the Dalai Lama, and each national Rigpa association has charitable and non-profit status.

Inviting teachers of all traditions: Uniquely, Rigpa regularly hosts teachers of all Tibetan Buddhist traditions who give teachings and empowerments, as well as Buddhist masters of other lineages, and teachers from different spiritual traditions. Such diversity is a continuation of the Rimé rigpawiki or ‘non-sectarian’ approach, advocated by Sogyal Rinpoche's master Jamyang Khyentse Chökyi Lodrö who was an incarnation of one of the initiators of the Rimé movement—the great 19th century master Jamyang Khyentse Wangpo rigpawiki.

Buddhism and western science: In more recent years this open spirit of inquiry has also resulted in an active and a mutually illuminating dialogue with experts from other disciplines, both spiritual and scientific, that continues to develop Tibetan Buddhism, in particular including through Rigpa's conference programme.

"Rigpa rigpawiki is a Tibetan word, which in general means 'intelligence' or 'awareness'. In Dzogchen rigpawiki, however, the highest teachings in the Buddhist tradition of Tibet, rigpa has a deeper connotation, 'the innermost nature of the mind'. The whole of the teaching of Buddha is directed towards realizing this, our ultimate nature, the state of omniscience or enlightenment–a truth so universal, so primordial that it goes beyond all limits, and beyond even religion itself."

Inspired by the meaning of the word rigpa, Sogyal Rinpoche gave this as the name for the vehicle he was developing to serve the Buddha's teaching in the West. Today, Rigpa has more than 130 centres in 30 countries around the world. 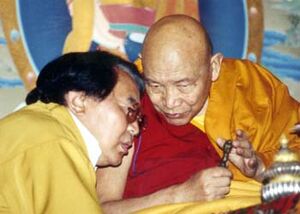